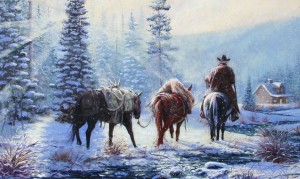 There was no reason Ronin couldn’t find his way out of Carson City for the holidays. No physical constraint was keeping him. No emotional attachment either, though there was the annual expectation he’d attend services at the Indian school south of town.

He’d been a part of the American Gospel Mission’s “Christmas supper and show,” as he put it, since 1877, when he first came to Nevada’s Eagle Valley, fresh out of employment with the Pinkerton National Detective Agency. A couple of missteps and they had severed their relationship with the handsome ex-preacher. He’d gotten involved with a Spiritualist client—the beautiful and shapely Madame Bovary, a pseudonym it turned out, taken from a French novel he never read. He didn’t know her real name. The work since—here a bad guy, there a bad guy, a few more bad guys and gals in-between—had been surprisingly enjoyable.

He had nothing else to do.

So when the mission called, via the usual holiday card and Christmas gift—a fruitcake, of all things, but it was better than a Bible he’d never pick up or let alone read—the gunfighter hesitated.

He’d attempted to back away from the Presbyterian woman’s mission school a couple of years ago. Their relationship had changed—it needed to. He had no regrets, and she’d gotten married to a decent Mormon man who’d made a name for himself in eastern Nevada, when Ronin and an Ormsby County deputy hunted a short son of a bitch who’d killed a woman he’d loved in Virginia City, not that anyone knew of the relationship between Ronin and the ball-gazing twin, an eye-catching fortune teller also.

He held an attraction to spiritually-minded women, though it bothered him to say so.

He’d abandoned the rigid orthodoxy of the Episcopal Church in 1873—the year the Colt Peacemaker was made—leaving a log-bound Wichita church in the less capable hands of those who wanted it—a tired-eyed merchant, his ignorant wife, an angry town constable and a pack of pigeon-minded misfits and miscreants who couldn’t tell the holy story from their own, not that the church saw things that way.

They figured he was simply finished. And he was, though he had some feelings about that.

The thing with the women crept up on him, like suppressed desires often do. He should have made peace with the One who would never let him go, though the Divine so clearly did, allowing him to change his mind, trotting off after a once-in-a-lifetime’s adventure to see America’s expanding West. It would soon be gone, he thought.

What wasn’t gone was his affinity for the deep and the beautiful, and the mysteries that often live in-between.

When the Washoe boy delivered the note—“Dear William,” it said, as Emma’s notes always did—the still smoldering hollowness took over, a lingering hunger he couldn’t fix. And while the truly holy could wait—Nevada’s dry open spaces, crags of heartless burnt-over ground punctuated by the crisp smell of sage and pine, the occasional cheat grass that promised just enough to always keep both beast and man the short side of satisfied—Christmas was looming, and the presents were being packed, and the program was being printed that said, as it always did:

Though he was no longer one, and didn’t want to be one, but would always be seen as one by the woman who guided the mission, and who a long and not so holy time ago had guided his heart like the sky-born star that once led wiser men to a truth larger than themselves.

Emma Nauman was no one to be ignored, especially at Christmastime, when the town’s note-worthies—donors to be sure, some of them no doubt significant—gathered at the mission’s spread north of Gardnerville and Genoa, once called “Mormon Town,” just south of Chinatown, an area that would never amount to anything, there being no need for the city to ever expand into the Carson Valley.

The southern spur seemed to argue differently, pushing people and product farther down the Sierras than anyone would ever have expected, short of railroad folk, who knew how to ruin a frontiersman’s dream like no other institution save perhaps the church.

Time was the devil’s playground. And town clock’s—phallic protuberances towering above city skies—the secret servant of them both. Their relentless march toward the railroad robber barons’ and church reverends’ dreams robbed free men of space and silence and wide-open places ungoverned by either. He was sick of both, though the season didn’t permit his saying so, nor the venue Emma Nauman imagined—a short service of carols and readings, and candlelight, and a prayer from the man once who once held her heartstrings, and was as intimate with her as any human savior could be, though even a virgin once became pregnant. And it’s not like he hadn’t tried.

He picked up the card, beige, engraved and a spot of color to suggest the season:

Green—for the fact that spring would someday come and that winter wouldn’t last forever,

Red—for the apples on Eden’s tree that brought sin, and the bishops’ robes who mediated the sacred toward all who believed,

Gold—the color of sun and light, and perhaps the richest gift offered the peasant child who laid in a manger because there was no room for such people in a civilized inn,

White—for snow and purity and the wafers eaten during the Eucharistic Mass, heavenly food for fools and felons and regular folk alike.

He turned the cardstock over, and was surprised to see an additional note:

Thinking of you, as the season turns cold and lonely, and only the brave come in. Always, Emma.

There was no letting go of the past. It would haunt him this year as it did every year at this time. She would trouble him, too, until he showed up on her doorstep, like a Christmas child in search of heavenly nurture and protection.

“Should I wait, sir?” the boy asked. The detective shook his head.

“No,” he said, quietly. “Tell your mistress I’ll be there, and I will be happy to offer whatever prayers there are within me.”

And he smiled, too, though he’d would never admit. San Francisco, and whatever enduring darkness or undertaking lingered there, would have to wait.

From The Rage and the Reckoning, by Gregg Edwards Townsley, all rights reserved, November, 2015.

Filed under: The Writers Edge and Tagged: Carson City, Christmas, Nevada, The Rage and the Reckoning, W W Ronin
← Previous